BEWARE, LEST YE BE DECEIVED

A month back I read an article from a Baptist Pastor wondering why so many home-schoolers were now beginning to home-church. He was worried that these Christians were in doctrinal error and could not understand why they would be leaving the “church” in droves.

During the same time, it had come to my attention that so many of these home-church families are not only NOT sticking with the scripture as their sole doctrinal statement, but excepting man’s theology stemmed from the time of the reformation, not understanding all of the grave doctrinal errors which are associated with it.

Near this same time I was asked what I thought of a healing revival that had come to Lakeland, Florida, which is close to where I live. They had claimed to have already had 400,000 attend. Having already heard some of the apostasy that was going on in this revival, I immediately told him that it was a false prophet and that men could no longer stand to hear sound doctrine. (II Tim. 4:3-4). I went to the revival to see first hand the apostasy that I had been told about. I purposely missed the first two hours of loud rock music in the guise of worship. I came in towards the start of Todd Bentley’s (supposed) healing service. I had never experienced a man of God ever to get up and have so little regard for the Word of God much less the irreverence of the work of the Holy Spirit. He had claimed that earlier that day he’d received an anointing that was going to, “blow their minds”. The hour that I was their, maybe three partial scriptures were used, then he fell to his knees and screamed at the top of his lungs as if in agony and the crowd went crazy for the anointing that he (supposedly) was receiving. Whatever he was receiving, I can tell you, was NOT the anointing of God.

How did we get in such a place that we would take emotional feeling over truth of sound doctrine, but we are there. These three topics that I started with may seem so different but are very closely intertwined. Going back to the pastor of the Baptist church who does not understand why families would leave the comforts of an established church to cram into their homes with four or five other families. He obviously does not understand the desperate needs of these families. The home-church families that I have been a part of have one common goal and that is that the hearts of the fathers have been turned back to the children. (Mal. 4:6)

The most basic need in Christianity today is going back to the purity of marriage. The family unit has been so torn apart due to the culture and has had no help from the local established church, who has the answer, but the church has lost their way and turned more to winning the lost with the world’s way, instead of sound doctrine. So, for the last forty years in America, we have been in a spiral of reprobation that has led us to men of God, drawing 400,000 people to a little town in Lakeland, Florida, trying to find some kind of hope (from a pastor who is screaming, on all fours, writhing on the ground)!! Yes, the church is in need of a reformation, but to get there, one cannot look to the reformers, but has to look further back to their first love, which should be Christ Jesus.

The reformation grew out of the Catholic Church, which systematically went virtually throughout the known world destroying every ancient manuscript that they could get their hands on.  For we have always had the Word of God.  And it is not man’s job to preserve God’s word, but God himself who has given us that promise. (Ps. 12:6-7) With all of satan’s best efforts, he could not destroy the Word of God, so he reverted back to the oldest deceit, “Yea, hath God said?” And many of the reformers fell right into his hands. (Gen. 3:1) Satan, with the help of man, has done a great job of making the world believe that Catholicism is a legitimate Christian church. Catholicism today is just as much a damnable theology as it was from its conception and most of those that come out of it, unless their minds are renewed by the Word of God, will carry grave doctrinal errors with them that they received while in the Catholic Church. (Rom. 12:2)

Many of the large home-school families seem to be losing their way, where they were once following after Christ only, are being swayed by the rudiments of man. (Col.2:8) The doctrine that I’m speaking of specifically is Calvinism. (Please don’t fall into the trap thinking that you have to be an Armenian or Calvinist. True Christianity started long before these two movements. A true Christian is neither, but is a believer in Christ and follows Christ’s example).
I will not go into the horrid examples of non-tolerance that Calvin did to his scoffers, such as quartering and burning at the stake, nor will I speak about the Tulip as there are many good websites available to refute this, but I will list some of the reasons I do not support most of Calvinism.

The number one reason that I do not support it is very simple. God has always loved and regarded man, not just as a pot that he has made for destruction, but He has suffered long, striving with man, throughout His existence. The first characteristic of true biblical love is patience. God has truly been patient with man. For example: Even with the first murder on earth, God went to the murderer, Cain, before it happened. It is such a beautiful verse of not only God’s sovereignty in knowing the future and of being the alpha and the omega, but also His love for all of the created. God gave Cain a choice that if he would do right, he would be accepted. Cain chose by his own stubborn pride to reject the pleas and warnings of God and killed his brother anyway (see Gen. 4:5-7). And let’s not forget the patience that God had during Noah’s time with the whole world as Noah built the ark for well over 100 years. God’s man worked and preached of an oncoming judgment. But through the hardness of their own wicked hearts, they rejected the Grace of God and were destroyed.

The second reason is found in Genesis 18:19. The Lord says that Abraham will teach his children justice and judgment. We can only know true justice and judgment by God. Our own laws are taken from God’s Word. If you say that God has made the majority just to be destroyed in eternal damnation where the fire quenches not, with no choice or will of their own, when He has told us that, “whosoever believeth in Him, should not perish, but have everlasting life”, then you are definitely teaching and preaching a different Christ and are destined to raise your children with doubts and insecurities for the rest of their lives. For the majority of you were saved because you heard a true presentation of the Gospel of the Lord Jesus Christ and received it into your heart knowing that it was a gift from God. You erase the picture that God laid out of 4000 years of man carrying a blood sacrifice for the remission of their sin and you cheapen the suffering and the love that God had as being the only Lamb of God for the remission of sin. The 4000 years of blood sacrifice was to show the need for redemption by the blood atonement. Just as in the Passover when they took a hyssop branch and put the blood around the door, so do we also, have to receive that same gift and put it on our hearts. We did not make the lamb, we did not shed our blood, but God gave it freely to all that will receive!

I am not denying the fact that God’s grace is only given by His Spirit and it is 100% God that saves, that is true. None of us can boast when we receive a great thing as if we had done something ourselves when we had no part in it. And also none of us are without excuse when we have violated God’s law and enter into eternal judgment by rejection of God’s shed blood.
Romans 2:14-16 is clearly talking of Gentiles that have never heard the Gospel, but yet having a conscience of the law, that all men are without excuse. Yes, we are dead in our spirit, but God has always made us a way of escape. The old saying, “Let your conscience be your Guide”, we all know deep down inside is a true saying based on these scriptures. Verse 15, “Which shows the works of the law written in their hearts, their consciences also bearing witness, and their thoughts, the meanwhile accusing or else excusing one another. Also verse 16 says, “In the day when God shall judge the secrets of man by Jesus Christ according to the Gospel”. It is very dangerous to take it upon yourself to change the character of God and to say that He is just, without giving you a way of escape. The Lord Jesus Christ is our example of God in the flesh and He held himself to the limitations of scripture and why we think we have the right to alter the Holy Scriptures and try to make people believe that our God is not a just God, is beyond me. I serve my God as so many before me, out of a debt of love. (I Cor. 1:9)

In closing, everywhere that I’ve seen the arguments for Calvinism, and I read the verses that they use to support their belief, it seems to make sense. But when they are read in the context they were intended to be read in, it always points back to God’s hearts desire that all men come to the saving knowledge of our Lord Jesus Christ.

Posted by The Pollock Family at 9:24 PM 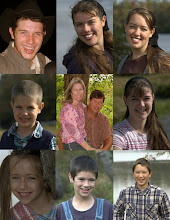